As we wrap up our first week back home, the routines are settling back into place. Brothers being brothers, grocery shopping, chores around the house, collecting mail and the list goes on...

As you know from previous posts, this surgery and trip have been in the works since March 2013.  It was not an easy decision to move forth and there was a lot of hesitation.  Through much prayer the decision became easier and we felt it to be the right call so that Henry can have a better standard of life.  Throughout the anticipation, planning and during a stressful, sleepless 3 weeks at Sinai it was our Henry that rose above and showed his strength, courage and praise.  Albeit it some discomfort at times and being in a "new" place he showed Stacy and I the character he is made of and how he will handle what comes his direction in the future.  As a parent, moreover, as a DAD, I am continuously impressed of how Henry has reacted to this entire surgery.  Don't get me wrong we've had the good and the bad.  We cut off his damn leg! He doesn't care, he just wants to be "Henry" and be like any 5 year old! He proved that in several situations: a.) by wanting to go down the slide one day after being released from the hospital! b.) standing (with assistance of his walker) to play ping pong at the HP house.

Henry will go far.  My three sons will go far.  I don't know where they get their courage, enthusiasm, spirit and good nature.  I can't take the credit, this is all them.  I can surely learn something from them.

Thank You!
We owe a great deal of gratitude to many people!  Without leaving anyone out unintentionally I am going to name a few people.  The first people we met on this journey is the awesome people at the Hackerman-Patz House.  Bill Turner, house director and Amy Powder, administrative power house.  Without the HP House, we would be staying at the Ronald McDonald house 20 miles away or a hotel.  William Hackerman envisioned this home for families who needed "a home away from home."

The hospital staff and nurses.  We were blessed to have one-on-one attention with the PICU and PACU teams.  Paula, Barb, Yevette, Janie, Blaire and students Kevin and Greg.  They all kept Henry comfortable and assisted in the proper care.

The OT team lead by Lauren.  With their help we learned to pedal tape and properly handle the spica cast.  (I think the cast weighs more than Henry!)

To our families that made the 1,000+ mile trek by car and plane; to the many letters/cards/packages received in Baltimore; to the many people and companies that donated to "Henry's Heroes" to all the people that said a prayer:  Thank You!

Transitions
As we are currently in the recovery phase, we are preparing to transition to the rehabilitation phase.  As part of this phase, Henry will be returning to RIAO August 20th for cast removal.  He won't need to be placed under anesthesia for this removal. This next trip will be 2 nighter (drive Wednesday, clinic Thursday, drive home Friday).

As soon as we get home, school starts for Henry and Ben (both at the same school, Logan starts pre-school the week prior).  During that same week, Henry will have his first PT at Cincinnati Children's and start the design work of his new Spiderman prosthesis.  The next several months will be consumed by time, energy and gas to downtown Cincinnati and Baltimore.

In the Fall, date to be determined, we'll travel back out to Baltimore for follow-up appointments.  This trend will continue at the 6 month post-surgery mark and the 1 year post surgery mark.

Please keep the prayers coming as we continue on this journey!

Pictures and Video
Here are a few pictures of Henry as we were preparing to leave Baltimore and from home:

"Ping Pong Henry" - From the moment we stepped foot in the HP House, Henry loved to hit as many balls as possible! 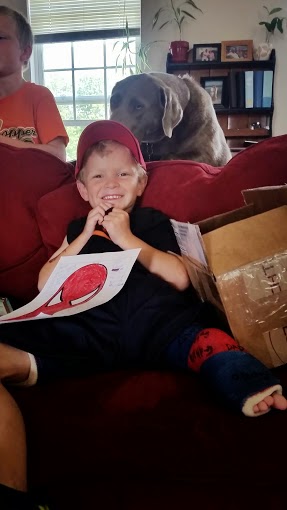 Even the puppy is in on checking out the mail for Henry.  Thanks uncle Garth for the cool Spiderman hat! 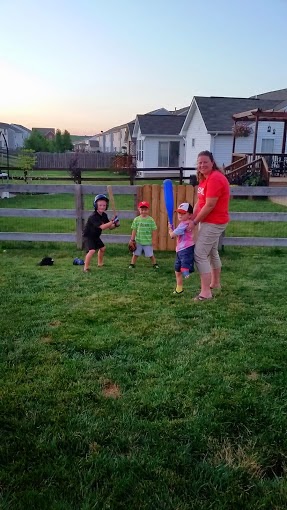 We had our own "All-Star" game in the backyard! The Reds,
Orioles and Dragons were represented.

Henry playing ping pong during our last full day at the HP house.

Stacy and I will continue to update the blog in the coming days and weeks.  We still have "Super Hero Henry" wristbands in stock.  Please call either one of us or email me at: garrick@garrickhorton.com to place your order.

All the best,
Garrick
Posted by Stacy at 7:32 AM