As the sun rises over Sinai Hospital, a new day has dawn.  Good Thursday morning from Baltimore.

With a few winks of sleep, the 3 of us are in the PICU (pediatric intensive care unit) for the day before moving into the pediatric room.  Luckily all on the same floor of this 2 yr old children's hospital unit.

Surgery took around 11 hours yesterday!  Henry's adventure began before at 6:30a with rollback to the OR at 8:30a.  Stacy and I received consistent updates about every 90 min to 2 hrs.  We finally saw him in the PACU at 8:00p.  He was calling for his mom.

After about 90ish min,  we rolled through the "underbelly" of Sinai to get over to the children's hospital side.  The hallway/tunnel seemed to be endless!  As we arose through the elevators, the pediatric team escorted us to our current PICU room.

Overall, the surgery was a success.  Dr. Standard explained in detail how the surgery went.  Albeit, a very meticulous process from beginning to end.  Starting with the "super ankle" surgery to the final x-rays post-casting and everything in between.  Each anatomy is different from the next.  Dr. Standard carefully worked around the major arteries including having to shape what little femur Henry had away from the femoral artery.  There are several screws and cables inside of the Super Hero! Only to make him that much faster!

Henry has been in and out of sleepiness, while taking in ice chips and sips of water.  There is some discomfort as to be expected with all of the IV's, ports, and a epidural.  He realized late last night that he had a spica cast on and was upset that he couldn't just roll over in bed.  His green blanket is providing him comfort.  I am hoping to be able to give him one of his Spiderman guys that he normally sleeps with today once we get through some of the nausea.

His spica cast is Spiderman red with blue striped "webs" covers from about mid-belly, down to his right knee cap and his entire "magic or lucky" leg side with his toes sticking out.  Even with the epidural, he can feel us touching his toes and is able to wiggle them as well.

Stacy and I are extremely grateful for Dr. Shawn Standard, his staff and the medical team from RIAO and Sinai Hospital.  Dr. Standard's head nurse, Harriet, provided updates to us directly from the OR.  Through her we felt the comfort she provided with the anticipated calls. Marilyn, life care specialist, was awesome with meeting us consistently throughout the day and providing a tour of this facility.  She stayed late to make sure we got to Henry as soon as we could.

Our thanks to Stacy's parents, Ron and Cheri, for making the trip to BWI to be with us during the surgery.  Many crossword puzzles were completed yesterday!

We can't forget that we have two other wonderful boys back in the 'Nati.  Grandpa and Grandma Go-Gos (Ron and Gayle) are spoiling Ben and Logan while we are here.  With the age of technology we have been able to Skype and talk with them all.  It's not easy being separated by multiple states and when the routine has been interrupted.  Thanks Go-Go's for taking good care of the boys!

Thanks for all of the text, DM, and FB messages that Stacy and I both received throughout  yesterday.

Most importantly, THANK YOU for the prayers!  It was through those prayers that Henry had a successful surgery!

I hear the music playing, so that is my que to end this "Oscar-ish" post.  Thanks again for following our journey! 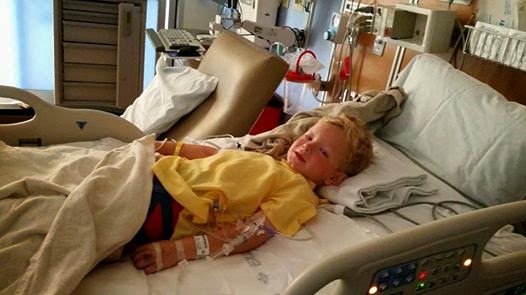