This day has been days, weeks, and months in the making.  It started when we made the decision to do rotationplasty last year.  It started again when we arrived in Baltimore in June for the surgery itself.  It started again in August when the cast came off and we walked out of the office with PT and prosthesis scripts in hands.

Today Henry came home with a prosthetic leg and walked, albeit ungracefully, across our living room.  HENRY WALKED ON TWO LEGS after not doing so for 4 months!

Thinking about this day since we scheduled the appointment has brought tears to my eyes.  This felt forever away, and here it is.  Even more joyful, Henry has done so well, been so strong and healthy, has proven that healing is one of his super powers, and maintained his ever-present smile (another of his super powers).  My tears come from a place of joy and gratitude and praise to God for all the blessings and miracles in this journey.

Now, we have a leg, unofficially.  This week is our test drive.  Since this is all so new for Henry, we are being given the opportunity to try the "finished" leg to check for any issues, small or large.  Next week, Henry will go back, and if all goes well we will officially receive the leg then.

Yesterday, Henry told me he didn't want to get the leg.  He has gotten fast on his crutches, and I think he might have been worried about it hurting.  I had to assure him that he could still use his crutches at school for a few days.  We will stick with this plan, but there is nothing like walking on a leg to bring out Henry's joy in having it.  He loved celebrating his new leg and showing it off.

His leg is beautiful!  It has the perfect placement of Spiderman, has an easy-to-use handle to bend the leg for sitting and eventual kneeling, has air flow for a sweaty foot, and we love it.  A huge thanks to Rob Pinkston, Patty Biltz, and Murphy the dog at Superior Prosthetic Solutions. 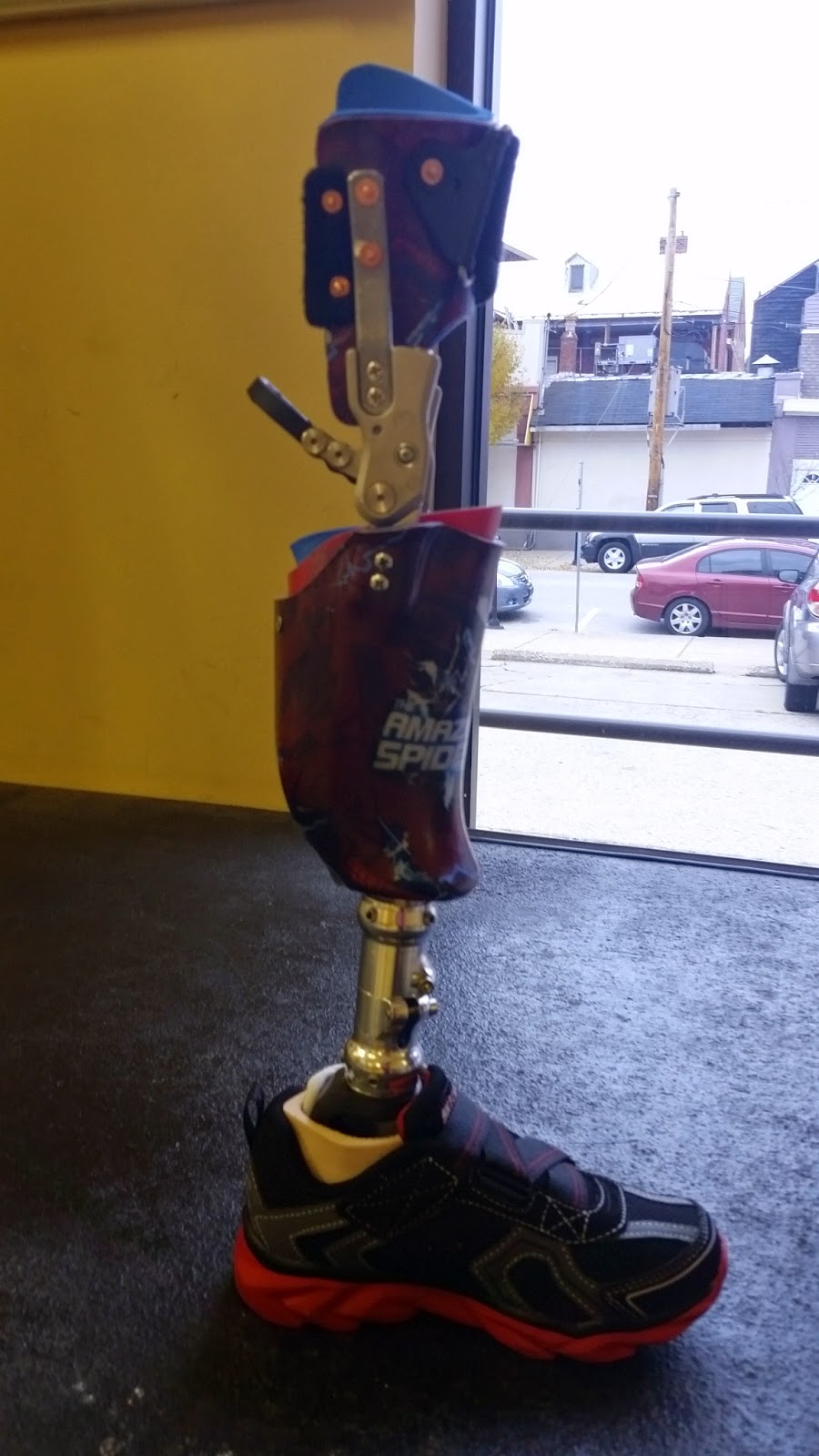 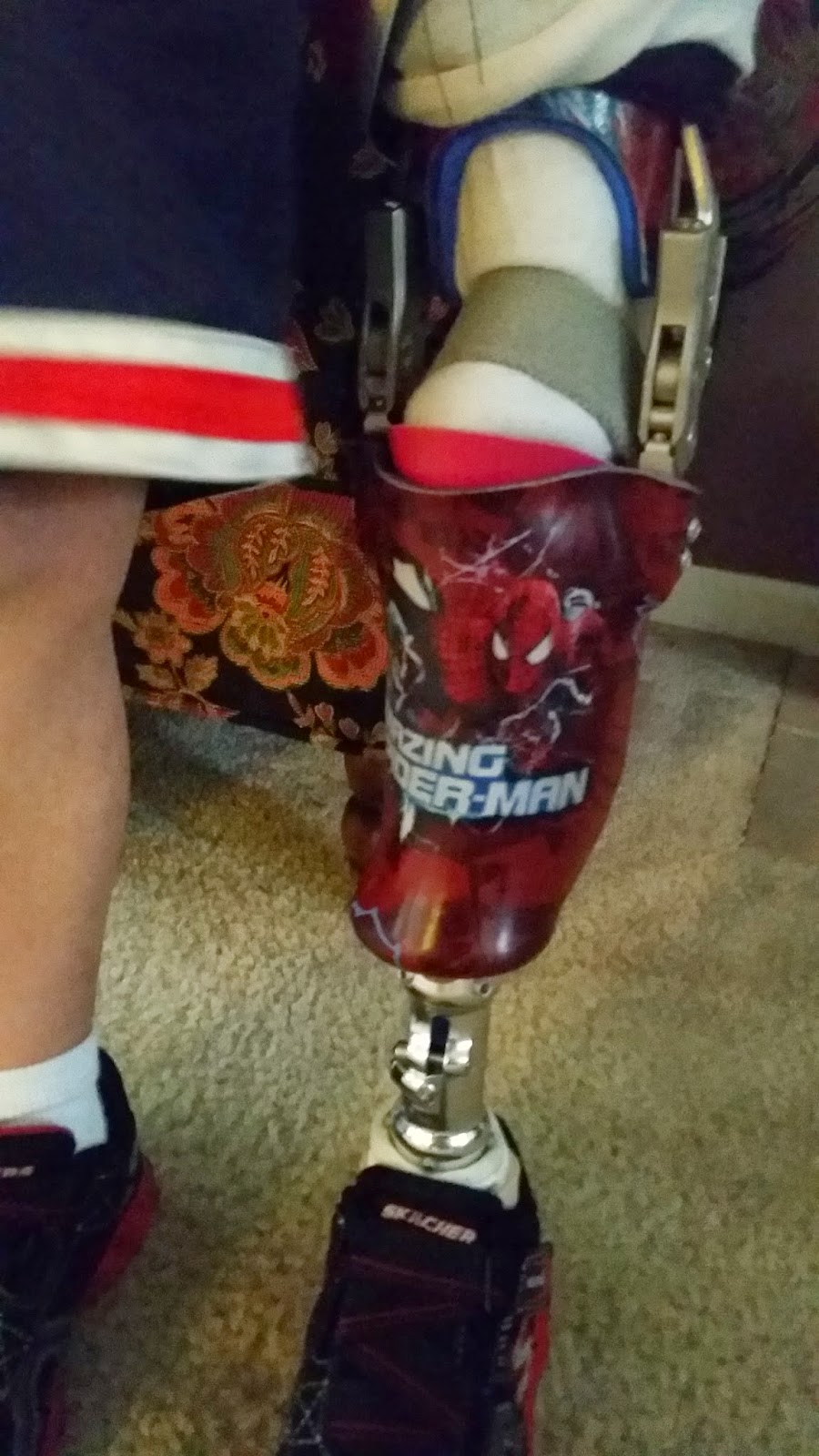 We have been very busy leading up to this day, so below is an update of what has transpired since our last post.

For the last 5 weeks, Henry has been working on Physical Therapy twice a week with a fabulous therapist at Children's. Add the two times a day Henry worked to stretch and strengthen his leg, and Henry has been busy.  Henry has had his usual positive attitude, showing off how high he can kick and enjoying all the attention.  He truly is inspiring.

And he has made the most amazing improvements!

In the nearly 4 weeks between cast removal and starting PT, Henry had gained about the 90 degree motion at his hip that we want at minimum. In that same time we did not make as much progress at his ankle.  It seemed locked and barely moved.  Around the same time Henry started PT he became significantly more comfortable and active, and his ankle began to feel a little more loose.  However, it still barely moved.  With some great exercises orchestrated by Ms. Katie, his PT, Henry has gained significant range of motion at his ankle, more each day.

All the while, Henry has been a kindergartener, doing all the things little boys do.  When we say that Henry has not let this journey slow him down, we might be understating it.  He has gotten in trouble at school for "walking" too fast with his walker and crutches.  Oh, my!  In fact, between his speedy walking, running the uneven surface of grass and playgrounds, Henry's walker underwent nearly daily repairs.  Last month, we pulled out his crutches, adjusted the height, and in no time he was off again on those.  Boy, can he fly!

He is working on adding motion at both joints and strengthening his leg with weights.  Now that we have his leg, we will also work on balance and proper gait.

I had hoped to have Henry walk for himself by Halloween in time for trick-or-treating.  I don't know if Henry will get very far next week, but I am so excited that he will walk down our sidewalk again on his own.  Happy leg day!