Hello from our "home away from home" - The Hackerman Patz House at Sinai Hospital.

A video message from Henry (& Garrick) from the RIAO this morning:

Today was our scheduled post surgery follow-up with Dr. Shawn Standard and his team at RIAO. Today's appointment ran nearly 5 hours including x-ray.

The first stop was into the casting room to get the spica cast cut off!  PA Chris Fisher fired up the torch and machette....just kidding.

Henry troopered through the cast saw noise and vibration. Within about 15 minutes the cast was cut in half.  Each half was later fabricated to become a turtle shell brace with use of padding and Velcro.  I'll get a picture of this posted in a later edition. The purpose of the brace is to keep Henry's leg protected until he has more function/movement in the leg. The turtle shell design makes it easier to remove as he gets ready to start physical therapy and prosthesis fitting.  Over the next several weeks, Henry will become more comfortable with his leg movement and will be wearing the brace less. 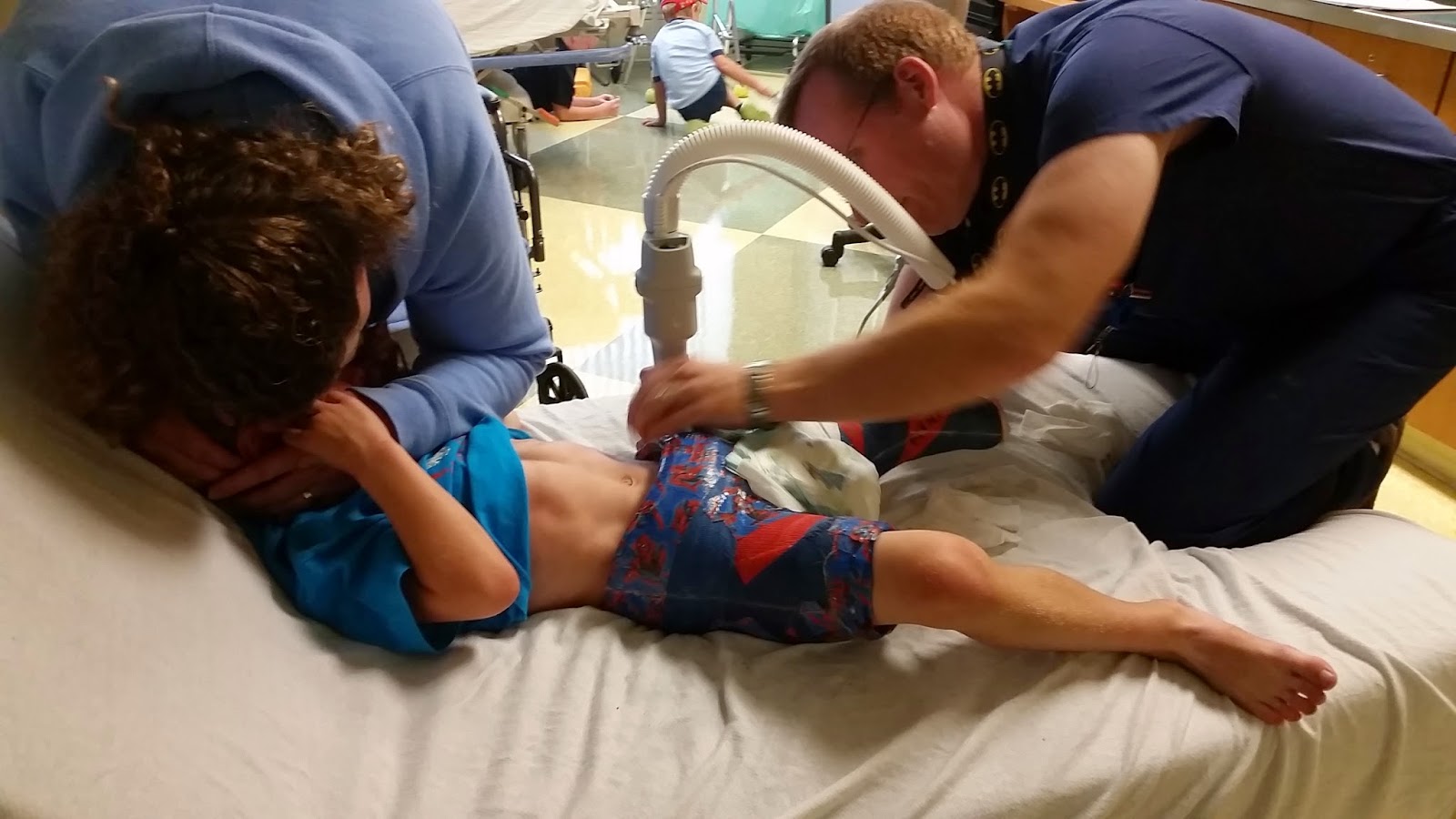 
Post Cast Removal:
Below is the image of the latest x-ray.  The spica cast did it's job to keep the leg and new joints in the proper position.  You can see some of the "hardware" that will now likely make TSA agents a little curious next time we fly. 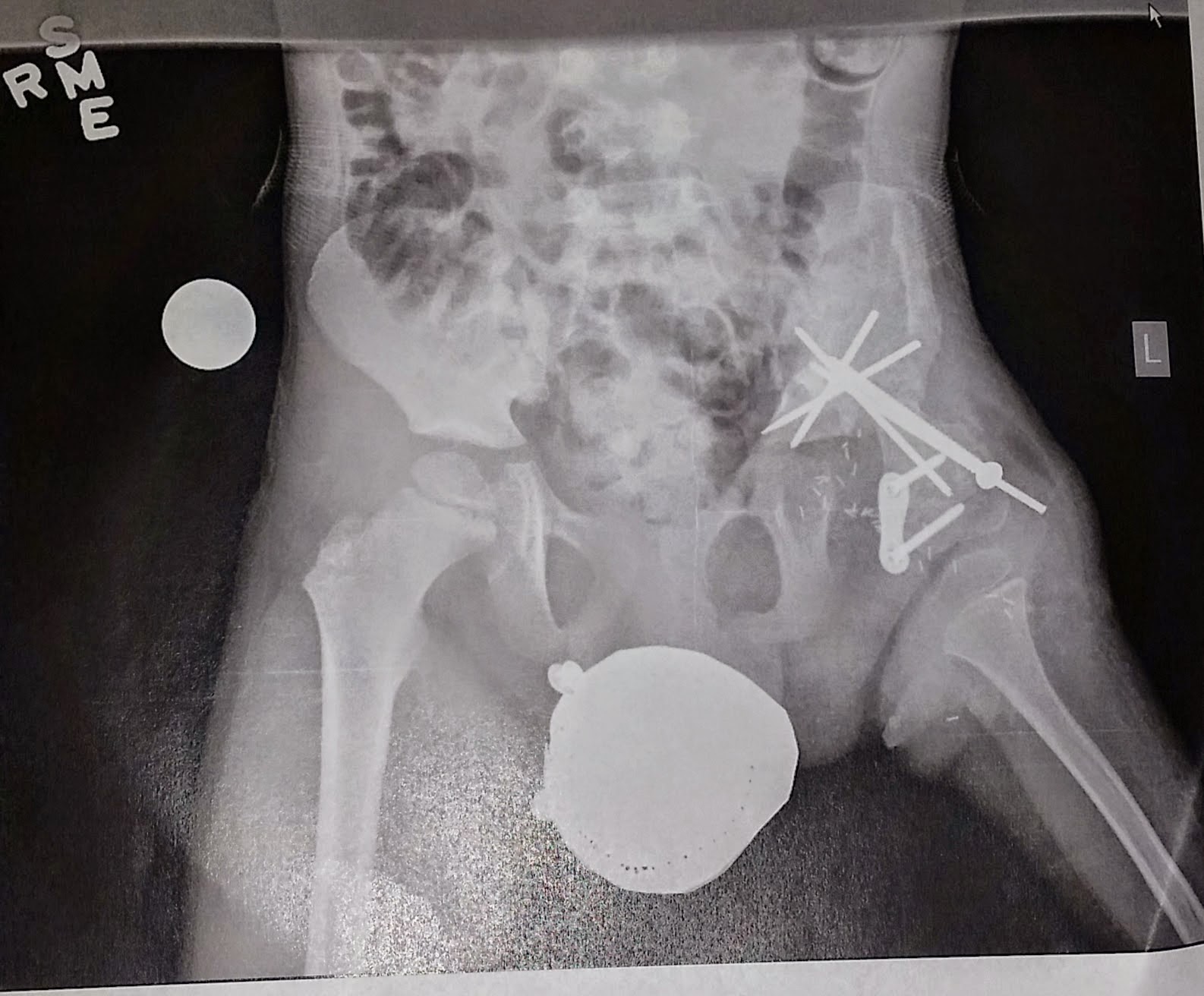 The following image shows Henry's "lucky" aka "little" leg and incisions.  Should you not wish to see it please scroll past the image. 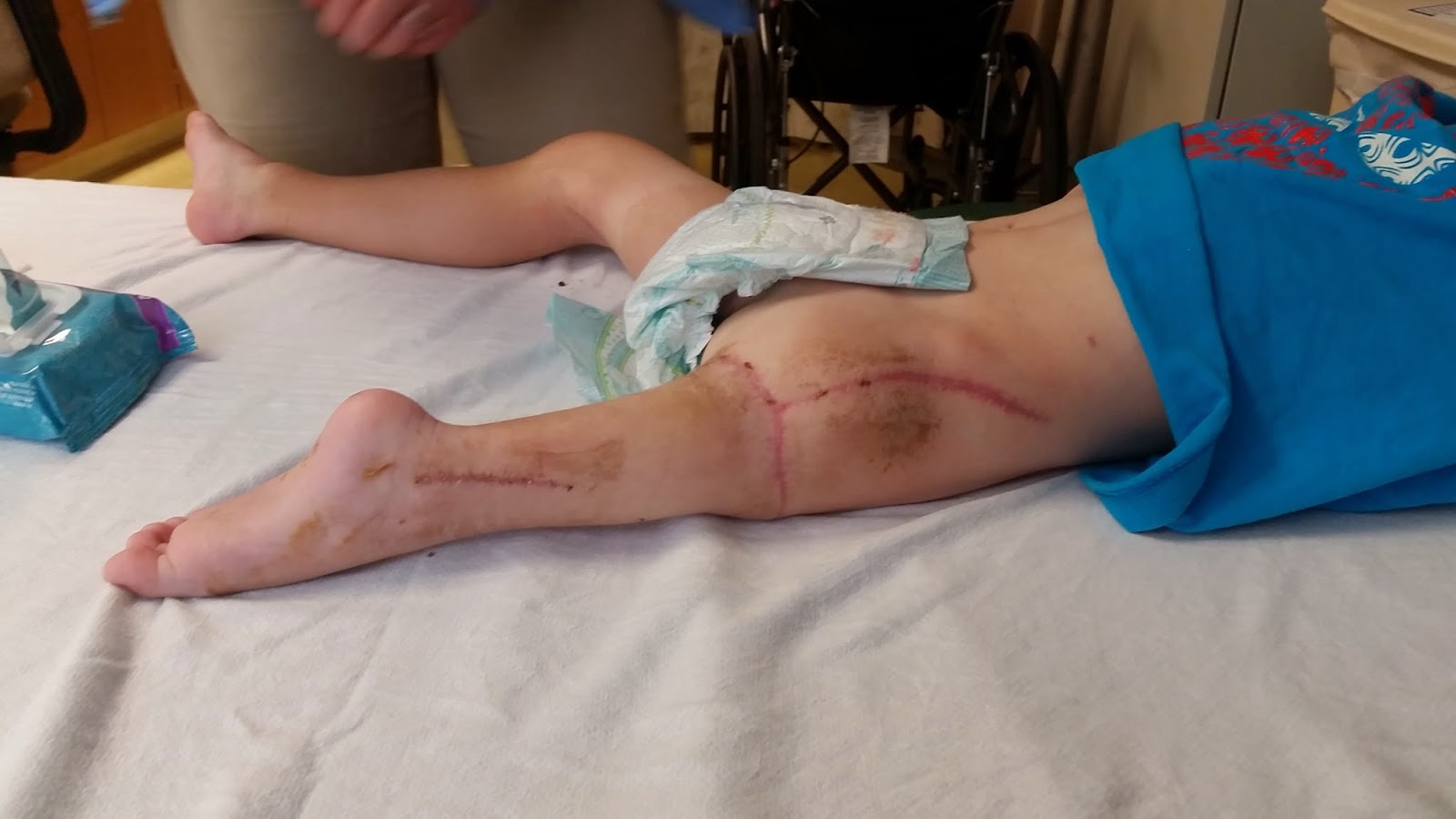 Several things to note when looking at the image:
1. His lucky leg (left) compared to his non-affected leg.  The left leg has been proportional to the right leg's knee since birth.
2. The incision at the ankle has a similar incision on the opposite side of his ankle.  This was the first procedure completed during the marathon surgery in June.  It was where it was determined that Henry was missing a bone in his ankle. It was also where there were several scews and two external cables were placed to prevent the ankle from moving sideways.  The cables were removed during the initial cast replacement.
3. The upper incisions are where the rotation and fusing of the pelvis took place.  The round (under hip) incision is 360*.
4. With the rotation, the next prosthetic will fit over the foot and up the leg to the new hip joint. The revised ankle is now the knee joint. 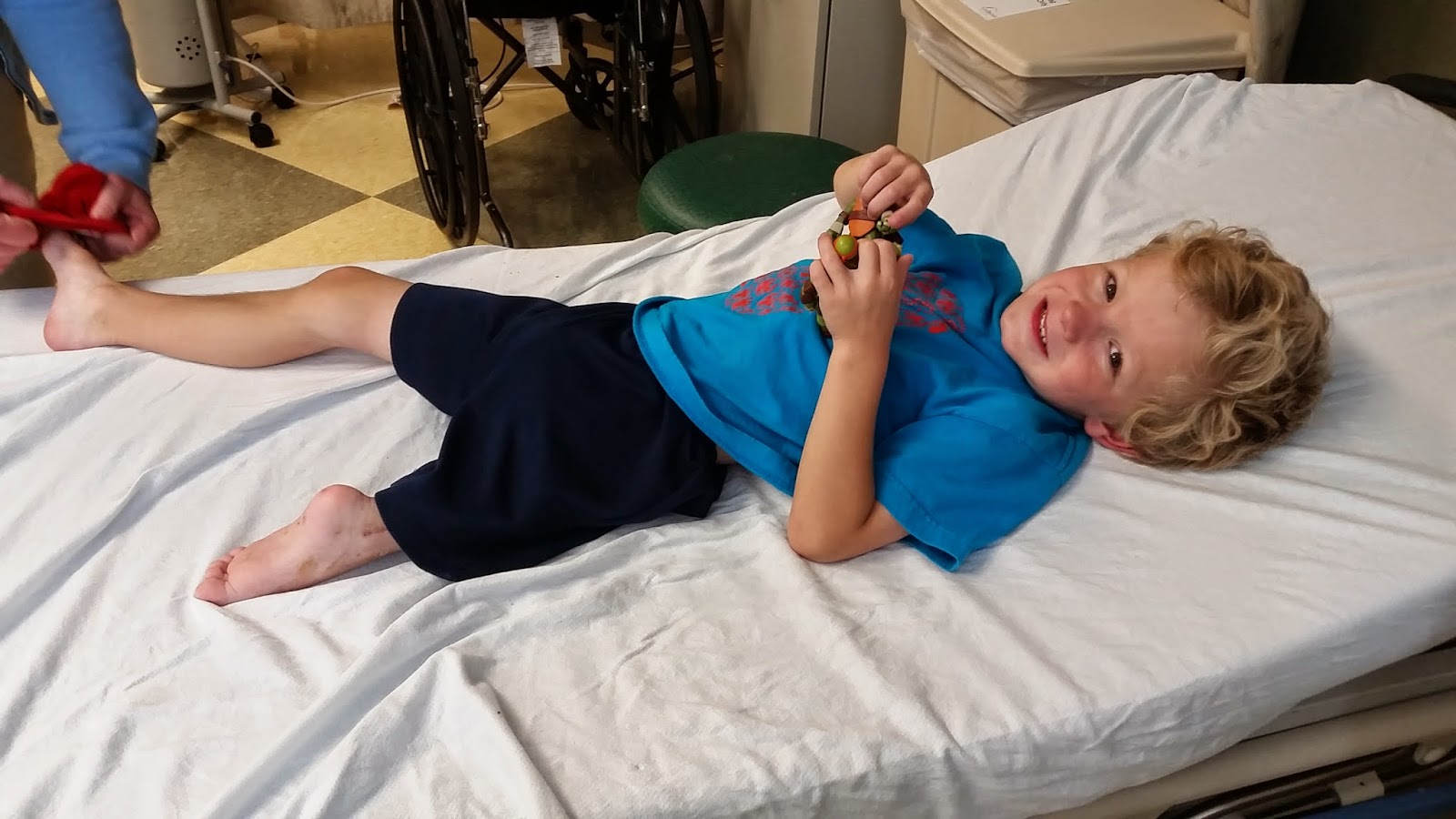 Henry without the cast, playing with his TMNT waiting for a visit from Dr. Standard


Dr. Standard came in to see how the super hero was doing. We got the "all clear" and that Henry was right on track.  We received the physical therapy script and order for x-rays to be completed in Cincinnati in 6-8 weeks.  Our next scheduled trip back to Baltimore will be in early December for continued follow-up/x-ray.

What's Next?
1. Physical therapy 3x per week for the next 12 weeks!  We are hoping to start this coming week.
2. Prosthetic creation/socket checks and new leg.  Our first appointment is next week.
3. Enjoy being a kindergartner!

Zoo Visit
Since all 5 of us were here for this trip, we made a brief trek to the Maryland Zoo and checked out some of our relatives....I mean animals.  It was great to see that a lot of the animals were actually moving about, whereas in our July visit most were trying to stay cool and finding shade.  The cheetah was pacing, a giraffe was trotting and Logan was climbing fences trying to feed a gazelle. 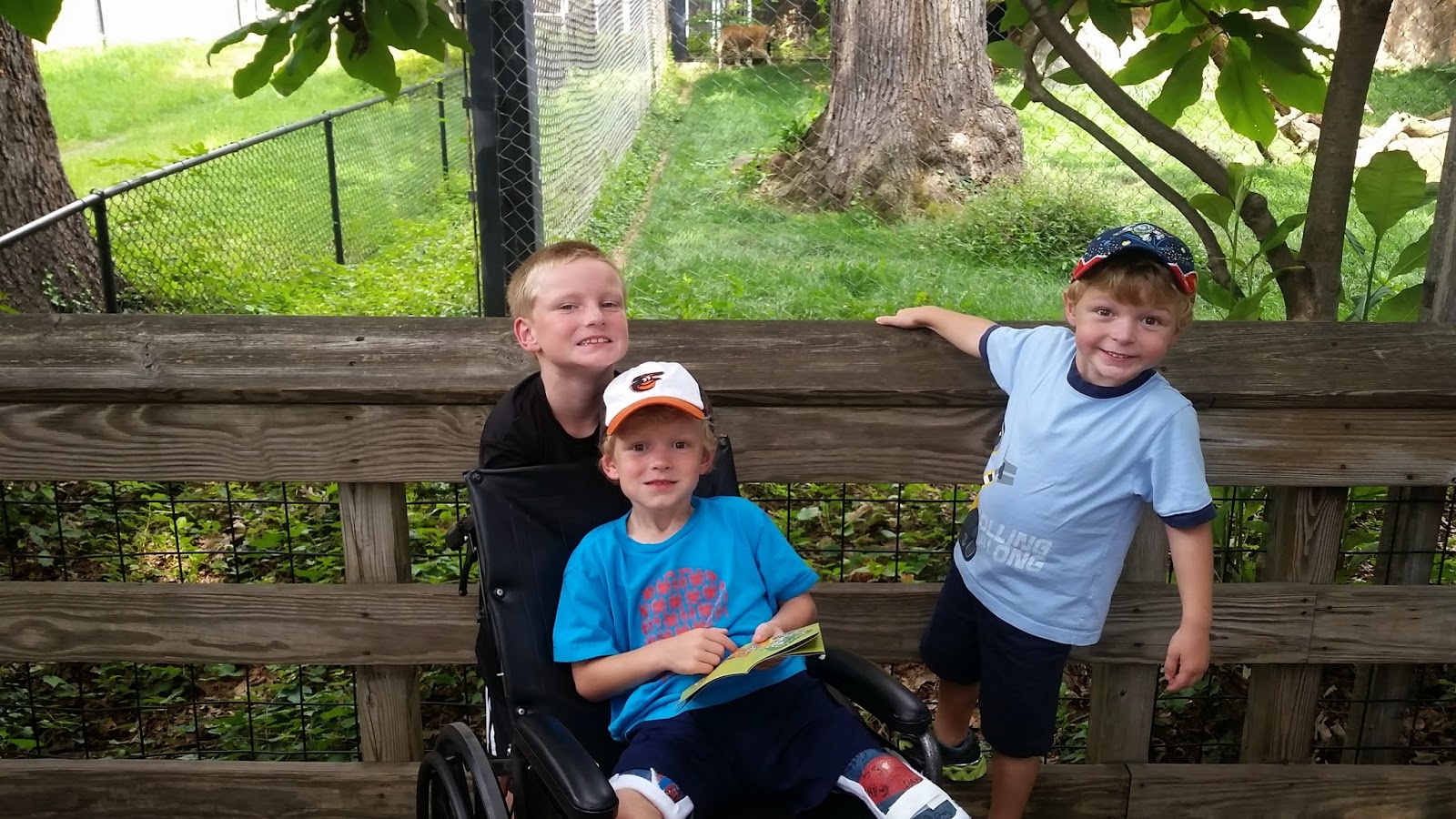 Homeward Bound
In the words of Paul Simon, we'll be heading back to Cincy on Friday morning in preparations for the first Fall soccer games for Ben and Logan (& Coach Stacy).  We've had a unique "Summer in Baltimore" adventure, meeting wonderful families at the HP House, reconnecting with the awesome staff at Sinai and RIAO.  Most importantly thank you to all who have followed Henry's journey through this blog, Facebook posts, and word of mouth.  The prayers, well wishes and donations made this adventure for us unbelievable.  Prayer holds an important place in our life and will continue to do so for an eternity.  It is not without prayer that Henry is healthy, infection free and is exceeding expectations.

Continue following this blog for updates about physical therapy and the latest prosthesis.